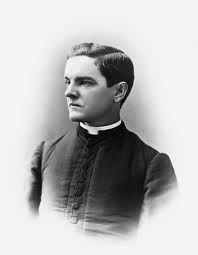 The Knights of Columbus was founded by the Venerable Father Michael J. McGivney in 1882. He gathered a small group of men in St. Mary’s parish in New Haven Connecticut for their first meeting. Today the organization has over 1.7 million members worldwide.  Presently there are councils in the United States, Canada,    Mexico, the Caribbean, Central America, the Philippines, Guam, Saipan, Japan, Cuba, and most recently Poland.

Why was the Knights of Columbus Formed?
The primary motivation for the Order was to be a mutually beneficent society.  As a parish
priest in an immigrant community, Father McGivney saw what could happen to a family when the breadwinner died and wanted to provide insurance to care for the widows and orphans left behind.  Catholics were regularly excluded from labor and other organizations that provided social services. Father McGivney also believed that Catholicism and fraternalism were not incompatible and wished to create a society that would encourage men to be proud of their American-Catholic heritage.  It was also founded in order to show that American-Catholics were patriotic and loyal citizens of the United States.